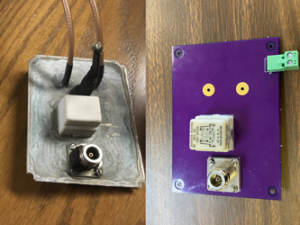 Old Antenna Relay Circuit Board along side the replacement printed circuit board.

I have had an interest in electronics since I was small. I took an electronics course in High School and built a short wave radio receiver. Unfortunately we never got it to work correctly, my teacher reviewed the circuit and it appeared correct, but never worked. It sparked a desire in me to know more about the technologies that fuel many of the modern marvels we use in passing every day. I was amazed at how a simple concept like a short wave radio, could be so finicky!

Right around that same time, two of my friends, Jim and Mike, got me interested in Amateur Radio. It was $5 to pass a test and be able to talk to anyone who happened to be listening. I studied and passed the written exam along with passing the 5 words per minute morse code test. Don’t ask me to communicate with morse code today, I haven’t kept it up. What I did keep up, were years of connecting with others who also passed their Amateur Radio exams. I’ve spent many hours working with engineers who share the same interest in Radio Communication. From satellite dish receivers, to digital modes, and raspberry pi mini computers, there are a lot of technologies in use by the Amateur Radio community! 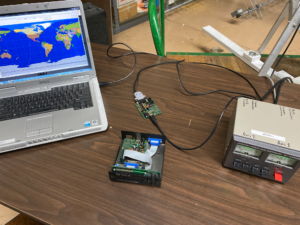 NASA also happens to partner with a non-profit program called ARISS (Amateur Radio on the International Space Station – ariss.org). It is a STEM outreach program to inspire kids who are learning Science, Technology, Engineering, and Math to pursue more of it. When a local Amateur Radio club and a local school submit an application together, if approved, NASA will schedule a day for the students to talk with the ISS directly, over the radio. Our radio station has antennas that are computer controlled and will “beam” the signal straight to the ISS as it passes overhead. The computer controls several motors on the antenna which move ever-so-slowly to track the ISS. The pass over us lasts about 15 minutes. Once the space station passes beyond the horizon, we lose contact, so it is a very brief window to speak directly with them.

Via more modern technologies, we have internet access on the space station too, and so, students can also ask their questions through the internet. Our method is a little more “old-school” but is still widely used in the space program. For example, when sending commands to a robot on Mars, the transmission must be aimed and timed appropriately so a satellite in Mars Orbit can receive the signal, and re-transmit it to the Mars surface, and thus to the rover that’s roaming around on the ground. These commands take 7-10 minutes each way! If you think our internet can be slow sometimes, try waiting 20 minutes round trip to see if a Mars rover even responded! There are a whole network of satellites around Mars in orbit, which receive and re-transmit signals to other Mars satellites, transmitting around the planet, eventually down to the ground, and then back up from the ground, and back to Earth again.

I’m a member of the Milwaukee Radio Amateur Club, one of the oldest clubs in the United States, and our club decided to sponsor our team. So for the last 3 years, a few of our members (retired and not-so-retired engineers) decided to build this radio station that would track the International Space Station and allow us to talk to the astronauts. 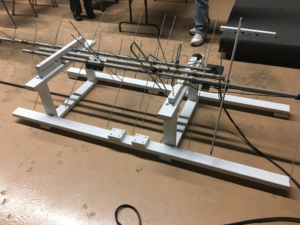 In building the radio station to talk to the ISS, we all had to exchange knowledge of radio and engineering. Ted worked for Rockwell Automation for many years as a facility engineer. His job was to lay out the floor plans for the projects the company would implement. He was extremely skilled at engineering things to fit in a restricted space, and thus our team ended up with a collapsible and fully transportable structure. When it is fully assembled it easily takes up the space of a small building, but also fits into a van when not in use. Ted also helped us understand how The Doppler Effect changes the radio signals whether the ISS is approaching or moving away from our position. Dean brought us some mechanical engineering skills. He was instrumental in rebuilding the motors for the rotor. The motors were straining and grinding pretty bad from years of rust and dirt build-up. Now the two motors spin freely thanks to his handy-work. He also built and assembled the aluminum backup antenna structure that NASA requires. I handled producing electronics and setting up the computer and control software. A few others helped out along the way, my friend Chris knows how to prototype circuit boards so the two of us actually removed two old rusted circuit boards from the 40 year old antennas, traced them with a micrometer, reproduced the boards in the computer, then remanufactured the two circuit boards as if they were brand new. Special thanks to Ham Radio Outlet for the antenna donation to our club and the space to work in the warehouse! 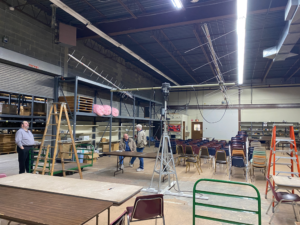 Part of the difficulty of this project was planning ahead. We only met once every month for a very short time, so planning was a large key to our success. We would talk briefly at the beginning of our work day about what had happened at the previous meeting and any work we put in between then and now. Then we would review our plans for that day for making progress on the project. Do the work. Then review what needed preparation for next time, things like ordering or picking up any new parts. Continuous communication was instrumental in the success of our group.

Today we have a radio station that is a multi-purpose tool beyond ISS communication. We can teach others about Amateur Radio and demonstrate how it works. We can definitely communicate with astronauts on the ISS. We can perform a technique called “moon bounce” (and it is exactly what you think), where we point the antenna at the moon, and the moon bounces the signal back to someone half way around our planet, then they do the same and the transmission bounces back to us for 2-way communication. We can point the antennas at satellites in orbit which also re-transmit signals over long distances. Then finally if conditions are good, we can point the antenna at the horizon and communicate directly with other ground stations upwards of 700 miles away (atmospheric conditions do need to be stellar for long distance ground communication to work).

I started this project with the idea that I wanted to build my own satellite station and learn how to provide ground to orbit communication. Now I can! Our team completed the radio station on March 4, 2022. I’m pretty excited about this accomplishment! If you would like to learn more about the projects I’m involved in, feel free to shoot us a contact. I look forward to meeting you!

Next time I’ll post about how we use Amateur Radio to track and communicate with Greyhound Buses for Irish Fest.